1. Mars is the fourth Planet from our Sun. It is our closest neighbour. There is a lot of speculation about the existence of extraterrestrial artifacts on Mars. The verified existence of such artifacts would be the first proof of intelligent extraterrestrial life. The Cydonia area on Mars, where, e.g., "the Face on Mars" can be found, seems to turn out to be the first place in outer space where such proof indeed may be found! 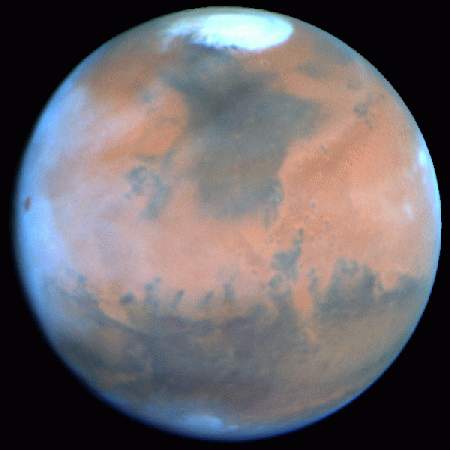 Since the 1970s, several satellites and probes have been launched, and these revealed the existence of pyramids, of a face, of cities in different locations, of tunnels and canals, of marshes and bush land...

So it looks like Mars was inhabited, in a distant past. The inevitable next question is what happened to its inhabitants. Many different theories have been postulated, but they all agree that at some moment in time, a cataclysm made the red planet uninhabitable and the Martians had to flee. Eventually they were forced to abandon their planet completely; although there are stories that some underground bases were created, too. They fled to Earth. Most sources, including the RA Material and several remote viewers, agree that they did this with the help of 'other' aliens (probably of the Federation, though one source, Courtney Brown, claims they did this with the help of the Greys).

The stories seem to conflict with regard to the date that all of this happened, as well as on the source of the cataclysm... (Unless of course there were several consecutive civilisations and/or cataclysms on Mars, which cannot be ruled out at this stage).

2. In Roman Mythology, Mars was the God of war. In Greek Mythology, his name was Ares.