Operation Right To Know (ORTK) was a grass-roots disclosure activism movement whose purpose was to demand the end of the UFO cover-up, and more specifically, to end to all sociological/political suppression of extra-terrestrial contact. It was founded in 1992 by Ed Komarek and Mike Jamieson. It started in the US, but then spread to the UK as well. Several demonstrations were held, including two demonstrations at the White House. The second one, in July 1993, received mainstream media attention: See, e.g., www.youtube.com/watch?v=MI6BSLUV9UU. 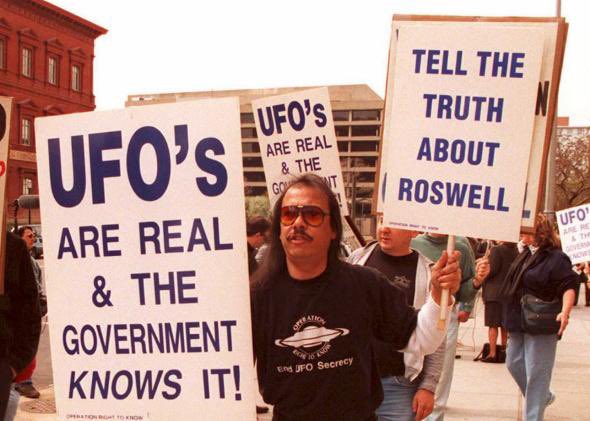 In May 2017, Ed Komarek revived Operation Right to Know. Its activities are being coordinated in a group on Facebook

The UK version of ORTK described the aims of the movement as follows:

On his blog, Ed Komarek wrote:

In 1992 Mike Jamieson and I founded Operation Right To Know. Mike had written a article on political action in Bill Moore's focus magazine and I got in touch with Mike and I said I am going to Washington to hold a demonstration even if it is just me and Mike said, "I will come too".

The idea of the first White House demonstration was to make the statement to the UFO community that a UFO cover up was first and foremost a political problem deserving of political solutions. I believed that because the data was being manipulated for political reasons one could not do good scientific work on the subject. I believed thatthe UFO community had been covertly redirected away from political solutions and into ineffective scientific solutions from the time of the Late Donald Keyhoe.

In the second demonstration the one on [YouTube], the idea was to prod the mainstream press into getting involved even if the propagandists in the press tried to make us look silly which they did their best to do. Heavy hitting SETI debunkers like Dr. Frank Drake had to come on at 3 the next morning to debunk us. I hoped that if we made a big enough stir in spite of the ridicule and the debunking some in the press would think that where there is smoke their may be fire. Soon afterward shows began to appear on TV like Sightings.

For the first demonstration I made up some large billboards from pressed wood and on these I glued pictures and declassified and leaked documents. I started work on the long banner and finished it up when in Washington at Mike's hotel room. He was teasing me calling me Bessie Ross. (I still have the banner)

In the first demonstration I set up tables of books and the large billboards on the White House ellipse on a cold windy day with blowing flecks of snow. Mike and I had trouble keeping the billboards pined down with lines and stakes because of the wind. People would come by and view the books and billboards from countries around the world. A couple of secret service people came up and talked to Mike and I about their sightings.

On the last day Mike, Elaine, Larry, and others took the banner around to the front of the White House for a demonstration. I don't know if I came or not because I might have had to watch my stuff on the ellipse. A picture was taken that was published in the MUFON journal and I thinkit was Elaine that wrote the article that went with it.

The second Washington White House demonstration started with us making up press releases and fliers and sending them all over the place. About two weeks before the demonstration the AP picked us up but deliberately distorted our message somewhat by saying we were looking for 20,000 pages government documents when we said very clearly in the press release that 20,000 pages of the governments own declassified documents proved there was a cover up. Many other press picked up on us from this and by the time of the demonstration we had a lot of media on site.

After the first AP article I called the AP and Harry Rosenthal's secretary told me she would notify him as to the error but he did it again along with attaching a silly tail to his article on demonstration day. Still the coverage was massive and we did have people like John Holman from CNN on our side as he was a friend of a friend of mine from Tallahassee.

We went on to hold demonstrations in front of the Pentagon that drew in Larry King and got him involved, in front of the GAO, and around the country and around the world. I think we were successful in our actions even though we were only able to slightly dent the massive 60 year old government cover up and public brainwashing operation.

We dissolved ORTK a few years later because we we unable to ignite a widespread uprising in the public domain a impossible task at the time. Still we have gone on record as having tried and I know the government and public did take notice.